In 2013, Simon founded one of the first dedicated trail running adventure companies – Run the Wild. He’s an International Mountain Leader, mountain running guide and all round trail running addict! He spent his childhood growing up on Gower in south Wales where he gained a passion for the outdoors. He’s climbed some of the tallest mountains in the world including Denali in Alaska as well as Manaslu in the Himalayas. As a runner he pushed his marathon time to around 2.5hrs, ran the Marathon des Sables in 55 degree heat and completed the UTMB. However, most of his adventures are far from the racing scene, with multi-day self supported trips. He shares his time between the Chilterns and the French Alps along with his wife and two German Short Haired Pointers.

He loves the outdoors and sharing his passion with others, whether it be guiding trips on Kilimanjaro and working on charity projects, to assessing Gold Duke of Edinburgh candidates. Despite major hip surgery a few years ago, he believes that life is all about your approach, and dedicates himself to encouraging others to realise their full potential and why his mantra is trail running is for ALL! 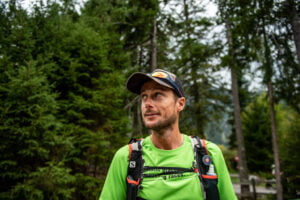