Nick loves to run. Over the last 10 years, Nick has completed 20  marathons and ultra marathons both on road and on the trails.  Included amongst these are two double marathons across the South Downs and traversing the full length of the Lake District in the Lakes in a Day 50 mile ultra race plus the Wendover Woods 50.   On the speed front, Nick has twice finished the tough Beachy Head trail marathon in 3 hours 45 mins, came 12th in the Chiltern Ridge Ultra 50k race and, after a few attempts, finally joined the ‘sub 3’ marathon club at Manchester in 2021.
Turning 30 and being overweight Nick needed a challenge. This took the form of the Three Peaks Challenge, which meant scaling Great Britain’s three highest mountains – Snowdon, Scafell Pike and Ben Nevis within 24 hours … including driving between them. It was during the training for this event that Nick was bitten by the running bug and has been hooked ever since, trying whenever possible to combine this with his other two loves – his family (wife, daughter + Ruby the Cockapoo) and travelling. Highlight of this was the 2017 City to Surf race in Sydney which the whole family ran. 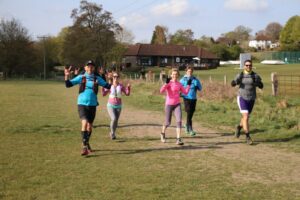