Lynda’s running story is an unusual one, to say the least. A lifelong lover of the outdoors, she enjoyed success as a dinghy sailor and remains a keen walker. However, it was just seven years ago, at a charity fun run (her first experience of running) that Lynda got the running bug. Keen to improve, she joined Tring Running Club and was soon achieving impressive results across a range of distances.

In 2017, by which time she’d been running just three years, Lynda set a new British record for the F60 age category at Marathon in 3.14. She went on to win her age category at the London Marathon the following year.

But it is trail running which is Lynda’s passion, and she is frequently to be seen running on the footpaths and bridleways in her beloved Chiltern Hills. She has completed several Ultra Marathons, OMM events and the Saunders Mountain Marathon. She is also a keen supporter of Parkrun, both as a runner and volunteer. 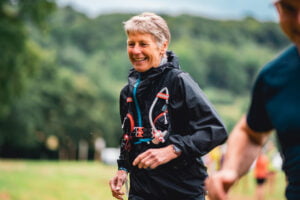